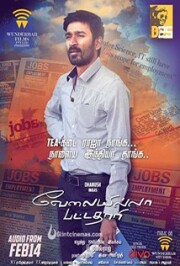 Dhanush (Raghuvaran) is an Engineering pass-out but is still to get into a job. He gets rejected in every interview who doesn’t like to go through any back door entry. Thus, his policy is to tact things honestly. After a tragic moment in his life, he is finally employed in a construction field who in between finds his love interest in Amala Paul. As his work progresses, he has to face some rival’s in the field, who are more powerful and influential. How Raghu overcomes these and wins in his life forms the rest of the story.

It is a tailor made role for Dhanush (who is in his 25th film) and he carries an energy throughout the flick. When we gets limited part of the ‘actor’ Dhanush, debutant director Velraj uses the mass image in him. He has come up with more fitter physique and the amount of his efforts can be seen during the climax fight. Overall, a committed performance. Samuthirakani is too good as Dhanush’s father and the chemistry between the both is one of the biggest assets for the movie. Amala is decent as Hero’s love interest but doesn’t get much importance in the overall film. Saranya as Dhanush’s mother has done her job nicely. Vivek isn’t utilised much, who comes in the later half mostly. The young actor who has done the villain role is a disappointment.

The basic plot of the movie tries to show the struggles and confusions in engineering students and was potential for a masala potboiler. But the screenplay of the movie doesn’t make much impact, especially in the later half which is comparatively weak and there is a shade of ‘Thiruvilayadal Aarambam’. Still V.I.P has its own moments like the excellent chemistry between Dhanush and Samuthirakani, projecting the confusions in today’s passed out students, and their run away from the responsibilities. But all of them aren’t connected well, which would have been elevated the tempo of the movie mostly in the second half. Dialogues are witty and throw some message lightly. The Cinematographer- turned- director, Velraj has done his job partly, but couldn’t bring the required impact. Overall, a satisfactory work.

Technically the film could have been better. Cinematography by Arun babu is neat and it is raw at times. Some of the songs by Anirudh are already chart-busters and they are picturised quiet well. But re- recording could have been better as in some sees we feel the lack of background scores. Editing is alright while production values are okay. Few fight scenes are good on screen.

The first half of the movie is good with an engaging screenplay and entertaining scenes between the hero and his father. Don’t be surprised if Samuthirakani is seen more in these kinds of roles in the future. The interval block, where the movie takes a turn, looks clichéd and thus lacks the impact. Second half looks somewhat flat and only shines in few scenes, here and there and lacks consistency. Climax looks forced and out of place. Overall V.I.P falls into the category of average flicks after a promised start. The below par screenplay in the later half is the one to be blamed.