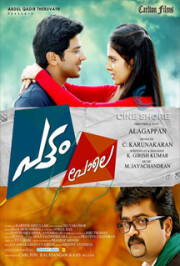 Cine Shore Rating:
3.0 Keep your expectations checked, you could have a decent watch.

Perfomances : Dulquer Salmaan once again does his job neatly with a natural performance. He brings a boyish in the initial episodes and matured one in the later.His confrontation scene with the heroine in the pre-climax scene is one example. He holds up the movie even at average scenes

Ddebutante actress Malavika lacks the grace of a heroine and her performance is just average.She has to mold herself in histronic department and dubbing so as to stay here. Jayaprakash, Lalu alex , Anoop Menon, Archa Kavi etc completes the cast and they are all fine

Technical Departments : Technically the movie lacks a richness which these kind of movies should have. There was a lot of potential for the cinematographer to cover the scenic beauty but remains okay.Songs and bgm’s from M.Jeyachandran is one of the plus for the movie which brings a feel good factor at lot places. Ace cinematographer Alagappan tries his hands in direction for the first time. He misses the youthfulness of the subject in few episodes ,but manages to do a decent job overall. Gireesh Kumar’s Screenplay is predictable but okay

Analysis : Initial episodes looks quiet amateur but things get better after a while. Though it goes predictable there is a feel good factor and decent moments. second half also goes flawless , but it becomes quiet slow towards the last few minutes. The pre-climax scene is nice followed by the ”mazhaye” song which keeps things lively. But the climax could have been better which becomes very much predictable. Still on a whole it doesn’t become much cinematic and appears quiet real

overall its a simple feel good movie with few small hiccups here and there. A better heroine and a better emotional depth would have been made lots of difference