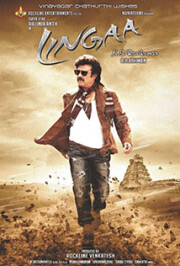 Lingeswaran a.k.a Linga is a small time thief who is the succeeder of King Lingeswaran who lived in 1939, pre -Independence era. The village where King lived is calling Lingaa to fulfill some demands and what follows forms Lingaa.

Rajinikanath is not in your usual role here. This time it is more like a less action and more emotion Rajini which may give a bit of disappointment to his fans. But it’s according to the plot demands. He is at his best during the flashback episodes and his elegance and screen presence benefits the movie a lot. The present character is a gap filler and thus remains half-baked. Anushka and Sonakshi looks gorgeous during the songs and both are okay in performance. Santhanam offers some comic relief while others supports them well. Jahapathi Babu is poor as the villain because of a poor character.

The basic plot of the movie had lot of potentials with scopes for sentiments, patriotism etc but K.S Ravikumar couldn’t rise above a mediocre execution both writing wise and direction-wise. Dialogs are fine.

This section has worked big time for the movie with grand artworks, brilliant cinematography by Rathnavelu etc. But Rahmans music is average and he fails in elevating the scenes effectively. Editing could have been a lot better.

Lingaa starts decently and goes smooth with few good comedies and Rajini himself. Flashback episode has came out well with nice emotions and a bit of patriotism. Yes there are ups and downs throughout the narrative but doesn’t collapse. But the last few minutes of the movie looks very amateurish which brings down tempo of the movie which is otherwise decent. Overall it is a decent effort barring the poor climax portions and can be watched for Rajinikanth and the flashback episodes itself.