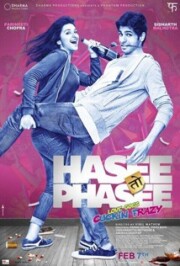 Nikhil (Siddharth Malhotra) is a naughty and sentimental guy while Meeta (Parineeti Chopra) is an intelligent girl who is often misunderstood. Meeta runs into Nikhil at her sister’s wedding while she is trying to elope from her home. 7 years later, Meeta decides to return to her home while Nikhil is all set to marry her sister Karishma (Adah Sharma). What follows next is what the film is about.

The film belongs to Parineeti Chopra as her character has the most meat. She does a fabulous job as the hyper girl with a heart. Siddharth does a decent job though there is room to improve. Adah is okayish while rest of the cast is good too.

The storyline is good, and the characterisation makes it realistic. On the flip side, the screenplay is inconsistent especially in the first half that picks up only towards pre-interval. Direction is neat while the cinematography is uber cool as you would expect with a Dharma Productions film. Music is a huge plus of this film as Vishal-Shekhar have rocked it!

Analysis – On the whole, Hasee Tho Phasee is a routine rom-com with realistic characters. The first half has speed breakers, but Parineeti manages to keep you glued while the 2nd half is well written.