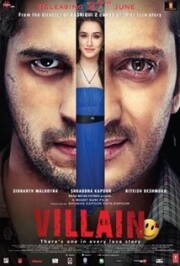 Cine Shore Rating:
2.75 Watch it for the performances.

Guru (Siddharth Malhotra) is the right hand of a dreaded gangster in Goa. He meets Aisha (Shraddha Kapoor) and falls in love with her, leading to give up his gangster life and settle as a normal person. But in a tragic incident Aisha gets killed by a psychic killer and Guru is forced to get back to his past in order to avenge her death.

Siddharth Malhotra has wisely taken a serious role this time after a couple of lighter ones and as Guru, he is riveting enough. Be his intense expressions, toned physiques, or the stubborn attitude, Guru is safe with Siddharth. Shraddha Kapoor is fine even though she doesn’t have much to do rather than looking cool and giving some one liners in the initial half. But it is Ritesh Deshmukh who re-invents himself with a brilliant performance as a psychic killer, especially in the climax portions, where he is sure to disturb the audience. Shaad Randhawa is decent as the cop. Aamna Sherief is fine as a sadistic wife to Ritesh.

The basic plot of the movie is a straight lift from the Korean Blockbuster “I saw the Devil”. But Mohit Suri has gone for a completely original screenplay bringing a great difference from the Korean one. However, one can easily say that the writing could have been a lot better especially in the later half. There are many cliches coming in the narrative like the heroine’s wishlist to be completed, an unconvincing switch on in the dreaded gangster to become a do good-er. which brings down the overall impact. Dialogues are always a forte of Mohit and his team and Ek Villain is no exception. The direction is good and a lot of scenes are executed well.

Ek Villain cashes up from its technical team to a great extent. Vishnu Rao’s cinematography is brilliant with lots of eye- candy shots covering the locales of Goa. His angles during the killing episodes increase the brutality. But it is the foot- tapping numbers and the background scores which remain as the biggest assets for the movie and these are something which comes to you once you leave the hall. There are many emotional scenes which get elevated as a result of these inspiring scores. Editing is fine but a few scenes in the second half could have been more crisp. Art direction is impressive.

Ek Villain starts off promisingly but unfolds the whole story in just 20 to 25 minutes. It is the emotional factor and the performances of the leads which moves the film. The first half is quite fine and the much awaited hero – villain face off happens just before the interval. Thus, it is a risky task for any writer to keep things lively in the later half. Mohit cleverly uses a back and forth narration with the help of a somewhat engaging flashback. Still, there are some inevitable drags here and there and the movie isn’t much consistent. But again the emotional quotient and the lead performances hold the movie to an extent. If the screenplay was little more tighter Ek Villain would have been an impressive emotional thriller. As of now it is an above average fare and deserves a watch for the performances and the emotional element.