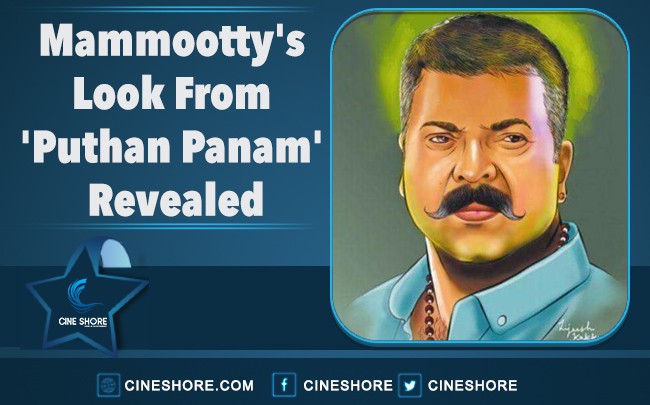 While the Mammootty – Ranjith teams new film is all set to begin its shoot very soon, Ranjith has revealed the title of the film as “Puthan Panam” – The New Indian Rupee. He even gave away the character description of Mammootty sometime before as a rugged guy with typical macho element like any commercial character of Ranjith. During a very recent interview to a leading daily, Ranjith have described the character get up too. With regard to the directors description, a painter has come up with an imaginary sketch of Mammootty’s character which looks an instant hit. It goes like the picture in the above where the character will have a shirt hairdo and a thick, twirled moustache.

From the title and the character description seems like the movie deals with money and the greed in the society for it. It is to be remembered that Ranjith’s 2011 film ‘Indian Rupee’ starring Prithviraj too dealt with a similar plot were a youngster was behind making some sudden bucks with the help of real estate. The film not only conveyed a good message, but also earned its share of profit at the box office. Later Ranjith dealt upon another plot which is similar to this, but this time money was replaced by gold and a group of people behind it. This was Mohanlal starrer ‘Loham’ which went onto become a Hit during its run. Now Ranjith’s latest one with Mammootty too being based on the money, it should be interesting to see where he brings the difference to his other recent films. As per sources ‘Iniya’ has been called to essay the female lead for Mammootty, who was last seen in the hit song from Amar Akbar Anthony. Ranjith has also called upon popular Tamil Cinematographer, Om Prakash who is best known for works like Arrambam, Neethane En Ponvasantham, Anegan, Maari etc. His very recent work for the Karthi starrer “Kashmora” has also earned appreciations from the critic.