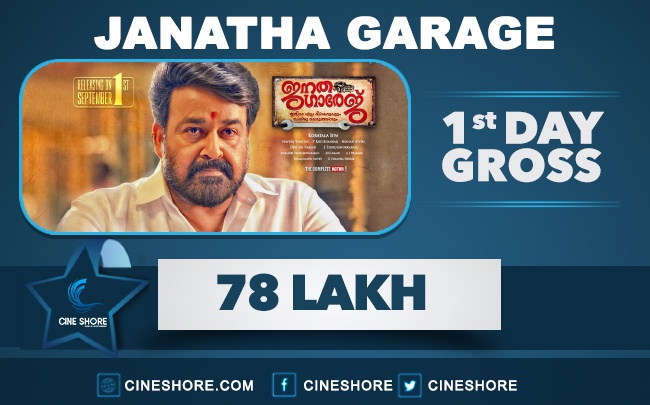 Janatha Garage has taken an average opening as far as Kerala is concerned. The Mohanlal and Jr. NTR starrer has done wonderful business in Andhra Pradesh/ Telangana districts on its opening day with a share estimated to be around 20.50 Crore. This is now the third highest opening day share for any Telugu film followed by Rajamouli’s Baahubali and Pawan Kalyan’s Sardaar Ghabbar Singh, which was the sequel of his 2012 blockbuster Gabbar Singh. The film has also set all time day 1 record in few individual territories beating Baahubali which is a great feet by any means.

In Kerala this was little different as we cannot expect such big opening for a dub film. It has grossed 78 lakhs from Kerala with a share of 37 Lakhs which has fared average. The situation was below average in the morning, but the decent word of mouth helped it get better by evening and that’s what helped in putting this figure. The promotions were poor without any promo cut prior to release in order to gather the buzz. Janatha Garage could have been performed better as even a less commercial film like Vismayam a.k.a Manamantha had almost the same kind of opening. Moreover, the close release of these 2 movieshas also affected Janatha Garage. Now it is to be seen whether the decent word of mouth can take it to the safe side before the Onam releases hit the screen next week. To make it worse another Mohanlal starrer Oppam is all set for the release on 8th.