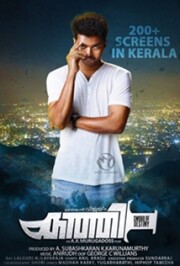 Cine Shore Rating:
3.0 Vijay and Murugadoss does their job once again.

Kathiresan (Vijay), a convict escapes from prison and lands in the place of his look a like Jeevanatham. There he is exposed to a dilemma of a group of farmers who is targeted by a corporate lead by Neil. How Kathiresan tackles the scenario and what happens to Jeevanatham forms the rest.

The undoubtedly Kaththi‘s biggest highlight would be Vijays brilliant performance. Vjay proves that he can act above just being a mass hero if he is in the hands of a sensible director and a clever A.R Murugadoss uses him every well. While he plays for the galleries as Kathiresan, gives a riveting performance as Jeevanantham. Samantha has hardly anything to do with a hero-directors movie and she is okay. Sathish isn’t used well by the director and his comedy numbers are missing, but has shared a good rapport with Vijay.Neil Nitin Mukesh is impressive as the baddie and his eyes speaks more than his words. The rest of the cast has many older artists and they all have done a brilliant job.

Screenplay – Direction : If you are expecting another Thuppakki you may be disappointed a bit, as this time Murugadoss has chosen a simple and straight plot. But what works again is his tricky screenplay and good direction. With Kaththi, Murugadoss has gone in the lines of some previous Vijay flicks of the hero becoming a saviour of a group of people, but he infuses a very relevant issue and some well executed emotional scenes, which are Kaththi’s USP’s. Dialogues are brilliant and hard hitting many at times. The press meet scene in the second half is an example. The regular dose of mass scenes is sure to delight the audience.

George Williams D.O.P is one of the biggest assets of Kaththi and is at best during the fight sequences. As expected Anirudh’s background scores elevates the movie every time he cuts in and the boy once again does his job with songs too. Editing is neat but few scenes could have been chopped off to keep the length a bit low. The fights are another added attraction and the coin idea is just another commercial masterpiece from Murugadoss. Production values are fine.

Kaththi starts off quiet slow and the romance and comedy doesn’t work out here. But as the film gets into the plot, things gets better with some nice emotional scenes and hero elevations. By the time of the interval it packs a punch. Second half starts on a decent note and the water issues and corporate projections elevates the proceedings. To keep things engaging Murugadoss puts few good sentiments and that works well. Few scenes like the interval bang and the tunnel sequences are clap worthy. On the positive side it is Vijays brilliant performance and Murugadoss’s screenplay with good involvement from the technical side and on the lower side it is the wafer thin plot and pace variations at times. Overall Kaththi provides what it promised to a good extent and is sure to emerge a winner in the season.