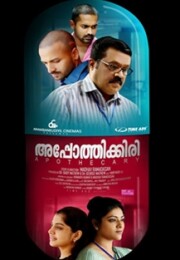 The film revolves around the experimentations and tests which private hospitals nowadays do on its patient’s. Dr Vijay (Suresh Gopi) is no exception till he comes to know about the aftereffects of the same. How it affects his life afterwards is the story of the Apothecary.

Suresh Gopi once again shows how good he is as an actor that just a star. He gets one of the best characters in his way and delivers it. Both Asif Ali and Jayasurya gets well written roles and they are brilliant. Indrans is really good. Abhirami who makes a comeback after a hiatus does a good job.

The film has a story which is very much relevant to current privatisation in hospitals. The screenplay is riveting and few times thought provoking. Dialogues are praiseworthy. Direction is flawless apart from few melodramatic scenes.

Cinematography by Hari Nair is just okay. But few shots could have been improvised. Music by Ilahi is good enough. Editing is fine.

Apothecary is undoubtedly, one of the hard hitting and films to come in Malayalam and will definitively find its place in the golden books of Malayalam Cinema just like the director Madhav’s previous film ‘Melvilasam’. The story, screenplay and the brilliant climax is the assets of the film. A slow narration and few melodramatic scenes are the only flaws. Make sure that you don’t miss this brilliant cinematic experience.