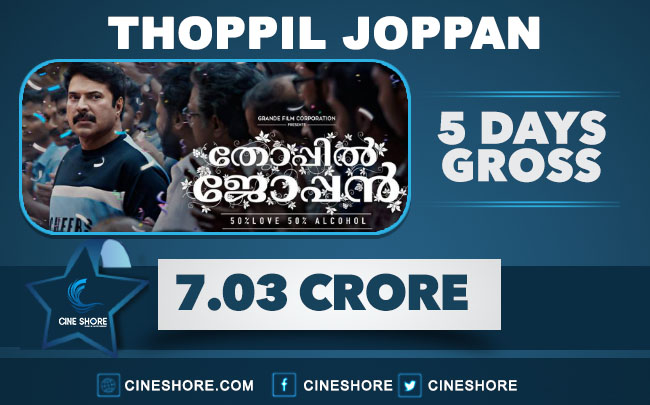 Despite its clash with the massive Pulimurugan, Thoppil Joppan has made its presence clear with an impressive hold through the holiday period. Thoppil Joppan took a good opening on its release day with the gross going just above 1.50 Crore. As the word of mouth came into decent levels, it made use of the weekend and the following 2 holidays grossing a very good 7.03 Crore over the extended 5 dayperiod. The figure is rather impressive once you take into note the size and genre of the film. Going by the trend the film should show drops once the holiday period is over as the 5 days gross has been quite over its potential [Due to the holiday period]. This was a similar case last month for Onam too, as all the films like Oozham, Irumugan, Welcome To Central Jail made use of the holidays despite ‘Oppam’ taking charge the season with big business. Now, it has been replaced by Pulimurugan which has taken thedominion, that too, like never before in recent times. Where ThoppilJoppan scored is in the Central Kerala districts like Kochi, Kottayametc. where light humors has takers. It has to be noted that this area has been a weak performer for Mammootty in recent past barring a few like Bhaskar the Rascal and Kasaba [Which after an impressive opening fell flat]. The distributor share has come past 3.30 Crore and looks like the 1st week will close at around 9.50 Crore plus. This will be Mammootty’s second 10 Crore grosser this year after Kasaba and as the budget is in limits it will clearly go past the hit mark by then. There is another advantage for the Pooja releases as the weekend will walk in once the holiday periods are over and if the film could stay till then, the weekends will do the rest before the actual test starts from Monday.