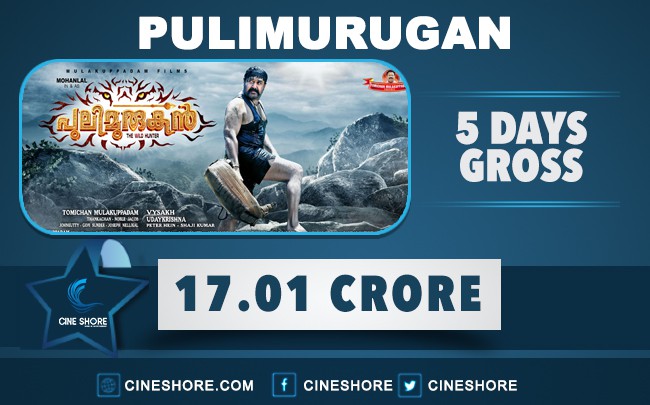 Pulimurugan has created a ruckus in Kerala box office with its tall business in just 5 days. After setting a benchmark of 3.88 Cr on 1st day, it stayed strong over the weekend with 11.02 Cr. The unusual hype and the following positive word of mouth has made things going great without any pause. The film after owning an earth shattering weekend, entered the weekdays with another holiday advantage making no big difference with Sunday. But there was a Hartal in Kannur district yesterday which missed some numbers as morning noon and matinee shows were called off. Nevertheless, the five days gross of Pulimurugan has been historical with around 17.01 Cr. Pulimurugan is now setting eyes for a 22 plus 1st week gross and with that it will cross the 10 Cr share comfortably. These are those sorts of records which even a Mohanlal film will find it hard to break unless a movie of this scope. Travancore area, as expected showed the biggest craze which has remained a Mohnalal fort right from the beginning and looking at the adcance bookings here, there will be no stopping till the coming weekend. Come to Central Kerala, Kochi itself is contributing that huge despite the less number of shows due to many releases. But the best news came from Malabar were usually Mohanlal films doesn’t perform to his range in other two territories. Pulimurugan has changed things as there too it is owning the records. With this Mohanlal once again assures that there is no star to equal him in mass masala genre if the right product is delivered at the right time. The genre, the ambitious ‘tiger’ factor, the grandeur, everything has just added to the craze for the film. To sum it up, we can name it as today’s Narasimham. The only question now remains is, whether it could hold after the weekend and emerge as the new Industry hit.