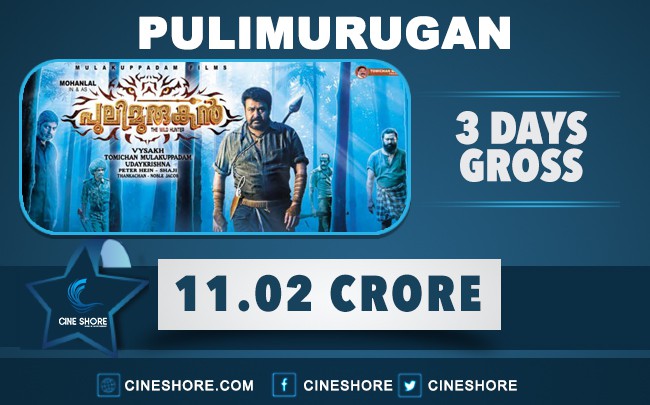 Pulimurugan has created a ruckus in Kerala box office with its tall business in just 3 days. After setting a benchmark of 3.88 Cr on 1st day, it has stayed strong on day 2 and three despite of the huge first day. The word of mouth and not enough screens for its potential has made sure that there isn’t any drop in the collection when you compare the day wise average for the movie. The total three days gross of Pulimurugan is around 11.02 Cr with a share between 5.20 to 5.40 Cr and that is nothing short of a smasher. With this the film has crossed the first week collections of many big films and is the just below 11.30 Cr of Mohanlal’s own Oppam. Travancore area has been historical with never seen advance bookings itself. Even the big capacity theatres are registering 100% occupancies despite of the handsome number of shows in multiplexes. Things are not different in Central Kerala and it is the Kochi multiplexes which is showing huge advance bookings unlike other recent biggies which didn’t had this much speedy advances. But the best news came from Malabar were usually Mohanlal films doesn’t perform to his range in other two territories. But Pulimurugan has changed things as there too it has been no difference. It was Drishyam which performed excellent for him here previously , as his other recent hit films like Loham, Ennum Eppozhum etc couldn’t perform much in this area. The film is all set to clock in more than 20 Crore in its 1st week itself at the worst case scenario. This is miles ahead of other fastest 20 Cr grossers like Premam, Oppam, Amar Akbar Anthony, Bangalore Days etc. With this Mohanlal once again assures that there is no star to equal him in mass masala genre if the right product is delivered. The genre, the ambitious ‘tiger’ factor, the grandeur, everything has just added to the craze for the film.