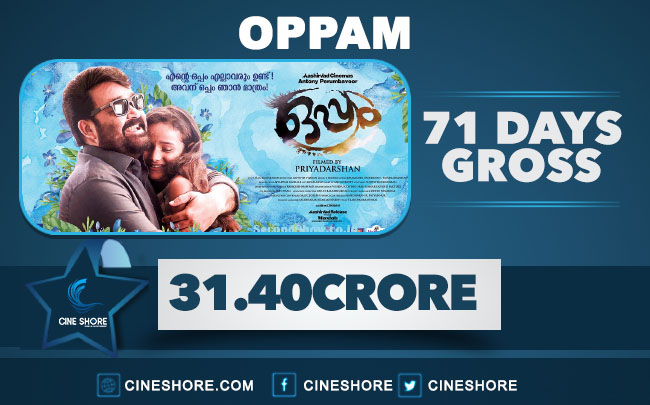 Oppam is finally more or less done with its theatrical business and had registered its own mark in the box office despite another Mohanlal starrer Pulimurugan setting fires. The film opened big for the Onam season and became the highest 1st week grosser beating the then highest Premam. Cashed it in the Onam season to the fullest being the best pick among the season ahead of Jeethu Joseph – Prithviraj flick Oozham, Dileep starrer Welcome to Central Jail, etc. With Onam holidays coming to an end of its 11th day the film slowed down and that was expected for the film extra ordinary performance during then. Post that, the film showed a noticeable drop on Monday. Major centres were quiet, steady but the small stations brought the difference on Monday where it dropped big.

This is normal for festive and non festive seasons as smaller stations tend to perform well during the festival weeks and drops after that unless there is mass attracting content or that great word of mouth.Oppam being a less friendly film with that section and the word for word just ranging from good to very good couldn’t perform like the holidays in these stations. Nevertheless, smaller stations in Trivandrum, Kollam and Trissur districts were better as these are the best performing areas for Mohanlal films usually.The film has put a superb total of 31.40 Crore after its 71st day and the distributor share has gone past 12.50 Crore mark which is phenomenal in any yardstick. The film has now broked into top 6 highest grosser of all time coming ahead of last year’s blockbuster Amar Akbar Anthony and will settle there behind another 2015 blockbuster, Dileep starrer 2 Countries. Thus, it is now Pulimurugan, Drishyam, Premam, Ennu Ninte Moideen, 2 Countries and Oppam at the top 6 all time grossers. If not for the Pulimurugan storm, Oppam could have done a bit more feels the trade.