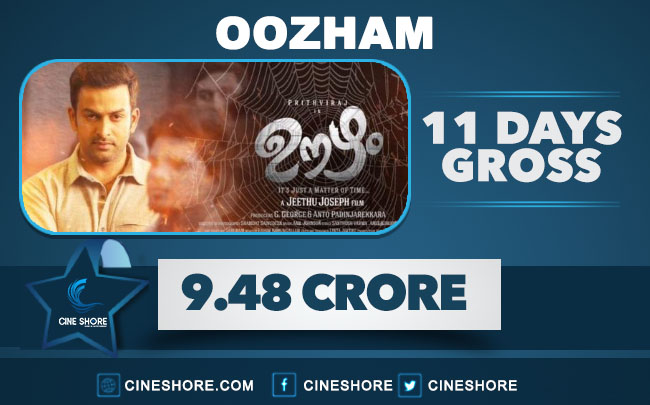 With a decent hold for last 4 days Oozham had made it, thanks to the holidays. The film showed a drop after the first weekend and that was expected due to the mixed reports it received from the audience. The film was more or less steady over the first weekend after getting a decent start. During then, it performed very well in cities and made a decent total from Kochi multiplexes it. As the film lacks in entertainment it isn’t that good in rural centres where entertainment or great word of mouth is a must. But that was actually nullified by the above said major centres where it held well over the weekend. But as it entered the weekdays, it showed signs of the drop as it could do only above average business during the Eid holiday itself. Tuesday saw a further drop as it was the previous day of Onam and if you needs to survive this day, you either have to attract the young audience that much or need to have very good word of mouth like Oppam which held well on this day. Oozham lacked in these factors and that has shown in the figures. Still, it went to gross a decent 7.45 Crore from its 1st week, with a 2.90 Crore from last 3 days. This might look a very good number, but it had 2 holidays in the form of Eid and Thiruvonam and that should have been a lot better. The huge stay of Oppam also dented any opportunities for Oozham to stay over, despite of its mixed word of mouth.
But the last 4 days have given a huge relief to the makers as it grossed just above 2 Crore which was enough for it to sail through the safe zone. Now, even a huge is okay for the movie as it needs a few more to be termed as a hit, say a 1.5 Cr or so. This is because of the budget, which was on the higher side. The distributor share is approaching 4.50 Crore mark and a 50 lakhs plus will take it through. The film has already crossed the final gross of Memories which did around 8.84 Crore, but that was a 3 years back figure.