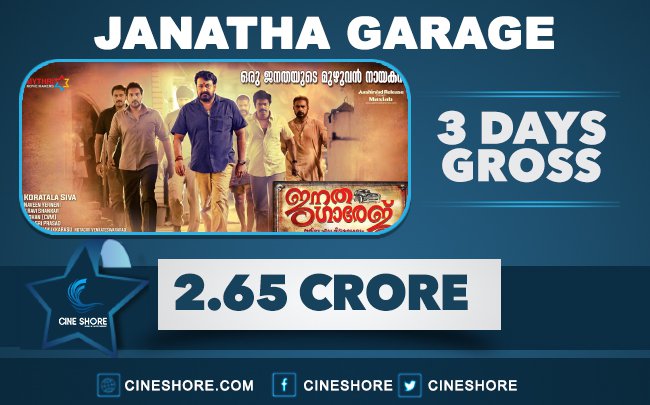 Janatha Garage which took an average opening on day 1, held decent over the weekend. The Mohanlal and Jr. NTR starrer have donewonderful business in Andhra Pradesh/ Telangana states till now and the 5 days share is estimated to go above 50 Cr. This is now the fastest one to cross the 50 crore share when you exclude the epic Baahubali. Moreover, Janatha Garage has already emerged as Jr Ntr’s biggest grosser beating his previous best Nannaku Prematho, Baadshah, Temper etc. Though the word of mouth isn’t that great its performance till date has been terrific by any means. Now how far it will go is the only thing to be seen as a Hit/Superhit verdict is already assured.

Coming to Kerala, things are little different as we cannot expect such big opening for a dub film. It has grossed 2.65 crore from Kerala in 3 days with a share of 1.12 crore, which is decent for a dub film. But now the movie should not drop much in the weekdays so as to sail through a safe zone and there is no much space too before the Onam biggies make their move. There are three big releases on Thursday with 2 Malayalam movies and one Tamil movie, which are all having good buzz. Janatha Garage could have been performed much better if there was better promotions so as to gather the buzz much before the film released.Another damage was tight releases of Mohanlal, who had Vismayam a.k.a Manamantha recently. As both the movies were dubbed ones, there was a sense of repeatedness among the audience. As of now, how much the movie can earn over the next couple of days will be almost its final business as most of the screens should be taken away by Mohanlal’s Onam biggie ‘Oppam’ which is also distributed by Maxlaab Films.